My Dad had asked my mum if he should take up golf after our first excursion to Turnberry where we watched every shot of the Duel In The Sun. I had been talking about Jack and Tom endlessly and wanted to do what they did. 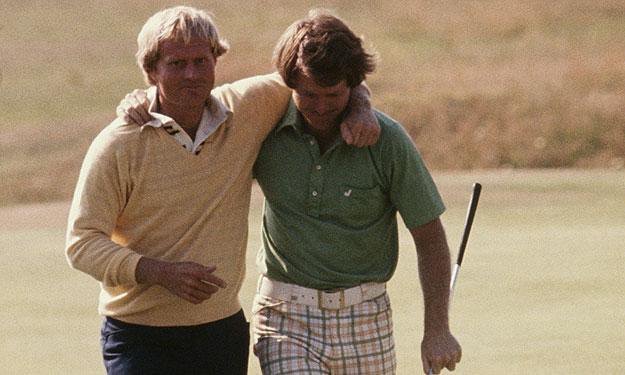 My mum had said something along the lines of there were too many jobs to be done, so no, but he ended up taking me to the golf course so often that he might have well have played himself. I needed clubs and at that time there were few choices for juniors about to start to play, particularly girls. before eBay there was a comic called the Exchange & Mart and he spotted something in there that he thought would do as he didn’t want to invest much money into something that might be a flash in the pan. A phone call was made and we made the long trip to Essex to go and buy this set of junior girls clubs.

Whe we got there my heart sank. They werent the shiny Wilson Patty Berg clubs I had had my eye on. They were a very battered set of irons and a couple of persimmon woods which had large chunks taken out of them. The seller, a young man called Mr G Fishpool, had the audacity to throw in the most disgusting mustard coloured plastic carry bag. My Dad beat him down on the price and took the clubs away with us. I was very disappointed.

He knew that something needed to be done, and as a non-golfer drew on his best resources. My parents had attended many masonic dinner and dances at Wentworth Club, so he went up to the Pro Shop, which in those days was behind the putting green, and presented the woods to Bernard Gallacher’s assistant. He was very kind and didn’t bat an eyelid. He suggested sending them back to the Slazenger factory to have them rebuilt. The woods would however cost more to repair than the whole 14 clubs had cost second hand. And when they did not return the clubs straight away after some time because the factory had been closed over Christmas, the pro rang my Dad back and reduced the cost to a pittance. Eventually we got them back and they were completely transformed into beautiful things, completely repaired, polished and with new grips.

My Dad had set to work on the irons, and in his workshop taught himself to replace the grips and grind down some of the damage. They turned out to be a brilliant set of clubs and as I didn’t grow too fast lasted me some time. They had a “rocket” shaft, A flex which made my hands strong because they were stiff and unbending. My Dad continued over the years to save a lot in pro shop fees by changing spikes, and repairing and regripping endless clubs, until he became quite expert at it.

He invested a lot of effort in my golf, not least as a chauffeur, and I carry that with me, with gratitude, ever since.