Posted on November 1, 2015 by queenieqantas 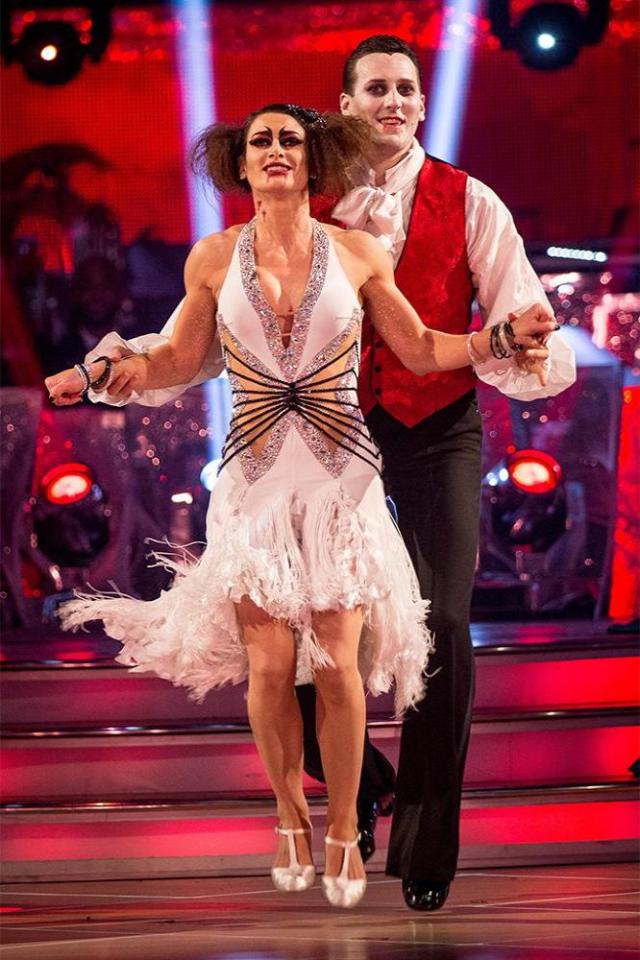 To Halloween Night and Kirsty was a vampire. All began well. An interesting VT filmed at Royal Holloway College before she came out in a white cobweb dress and short frizzy hair to dance the charleston. The audience began with them whooping at Brendan’s flying on a wire and clapping to the music.

Then it all went horribly wrong. They miss timed one of the lifts so it was left out altogether which meant there were some awkward seconds to fill before they could continue. Finally it was over when Brendan bit into her.

Was that OK? asked Tess Daly, unnecessarily. “Yeeaaah” said Kirsty, meaning not really.  Bruno Tonioli began. “You made mincemeat out of that. What a mess but you just saved it by the skin of your teeth”. Craig Revel Horwood concurred. “It was flat footed. You lost all sense of it and your kicks were out of time”. Darcey Bussell focussed on the positive, her brave and impressive lifts. Len Goodman said that even professionals go wrong, its how you cope with it and you coped very well. But you’re playing snakes and ladders. Last week up, this week down”.

The results show, aired on Sunday, is recorded in the studio after the main programme has been transmitted on Saturday. At 11pm a mole who had been in the studio tweeted that Kirsty and Brendan had been voted off the show. Waiting to see if this is right but they were second from bottom after the judges votes.

And so the mole was right. On Sunday’s show she said “I so wanna stay” and her dance off was as good as she could have done. So it was bewildering why all four judges voted for the other contestant and not her. Kirsty was gracious in defeat and said “It’s my turn to go. Brendan has been incredible and so supportive”. What was interesting was how the twittersphere became very busy with people expressing how well she had done and she had gone too soon. Unfortunately these same people didn’t vote. So no more dancing on prime time television, but Kirsty can look back on this and see that she has discovered that she can perform. In fact I think her talents lie in acting and thats where she could be exploring her opportunities in addition to sports presenting.