Posted on November 6, 2015 by queenieqantas 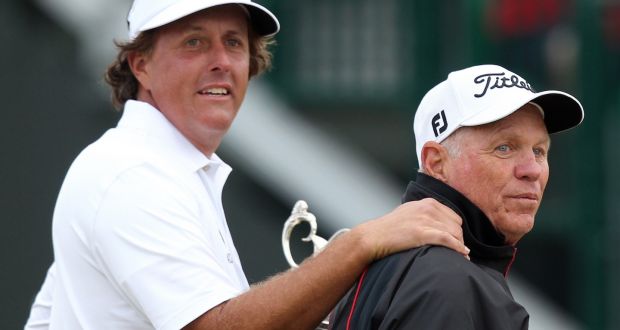 Phil Mickelson threatened to make some “drastic changes” nearly two years ago, then he changed his mind. But yesterday he and Butch Harmon had an amicable, professional split. Mickelson flew his private plane to Las Vegas for a 2 hour conversation with his coach of eight years saying:” I wanted to talk to him in person. It’s not something you do over the phone, you just don’t do that”. Quite so.

Mickelson is now winless for the longest time in his career, since his unexpected victory in the 2013 Open Championship and has now slipped to 25th in the World Rankings. It seems that his replacement coach is Australian Andrew Getson who is based at Greyhawk Country Club, Phoenix, which Mickelson represented in the early days of his career. Getson spent 10 years playing professionally on the Australasian and Asian tours and grew up alongside Geoff Ogilvy and Aaron Baddeley. He has occasionally taught former US President Bill Clinton.

Butch Harmon started to teach Mickelson in 2007 after parting ways with Tiger Woods after guiding him through the most dominant part of his career. Harmon has done an exemplary job with Mickelson, even though I still remember an exchange in the Sky Sports studio between him and Ewen Murray, during a US Open in Harmon’s Tiger Woods years. It was when Phil was rather more wild off the tee and unpredicatable than he is now. I remember this because I wrote it down, what they said was so blunt. It went like this:

Murray “+7. You have to say that is exactly the score that Mickelson deserved. He played this course with absolutely no respect for it”.

Harmon: “I agree. The way Mickelson plays is pathetic”.

We’ll see whether Butch Harmon will revert to his blunt assessments now he is off Mickelson’s payroll. In the meantime he will have more time to nurture Rickie Fowler who looks really ready to progress to the highest level.

As for Mickelson his lack of form over the past two years has coincided with the US Securities and Exchange Commission’s enquiry into his “suspiciously timed trades” in Dean Foods in 2012. This led to him being interviewed by two FBI officers as he came off the 18th green at the Memorial tournament. As of 31st August this case was still open and under investigation. Phil, who states he has done nothing wrong, has had other worries than golf on his mind.

He needs to have this resolved as soon as possible. Because the glittering prize is still out there. Jack Nicklaus was, after all, 46 when he won the US Masters. With one last push the US Open, the one that has always got away, could be won next summer. And what a celebration that would be, a completion of the career grand slam. For most players I would say this would be an impossible task. But Mickelson is no ordinary player, he has extraordinary mental resources. Watch this space.