Tiger returns to play in the Ryder Cup

Posted on September 4, 2018 by queenieqantas 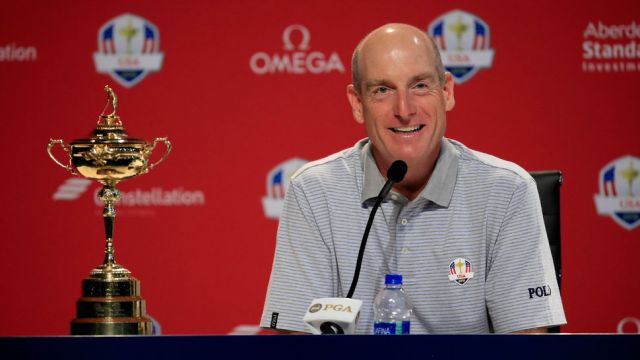 An hour ago I was watching Sky Sports News and seeing American Captain Jim Furyk announce Tiger Woods, Phil Mickelson and Bryson De Chambeau as three of his four Ryder Cup picks. As Tiger is now playing, he was stepped down from Vice Captain duties which were given to David Duval, Zach Johnson and Matt Kuchar.

I was enjoying the press conference a lot. This was a huge moment Tiger returning to the Ryder Cup as a player. I was enjoying Phil’s expression when he was only asked one question then the questions went back to Bryson who was clearly more interesting to the press. His irritated expression said “what about me, I’ve got lots to say”

And then just as Tiger had spoken and given his reaction to being picked, abruptly the cameras moved away from the press conference and on to Andrew Coltart and two news anchors who said absolutely nothing we didnt know. Agh. So frustrating! This was a big moment and we wanted to hear from the players, especially Tiger, not people in the studio who seemed to be explaining things about the Ryder Cup to people who had never watched golf in their lives. It seemed Andrew Coltart had to say something because he had to earn tonight’s fee.

At 10pm people watching this broadcast wanted to watch the full press conference, not this! So I tried to watch the Golf Channel feed from America, and couldnt access it through any of the providers because they didnt accept a UK cell phone number. Is there a transcript anywhere? As much as I appreciate everything Sky Sports gives us as a broadcaster, usually over and above expectations, this is the Ryder Cup. As a world sporting event is comes narowly behind the Olympic Games and the World Cup in worldwide viewer interest. This press conference was really significant.

Venting of frustration over, and I hope they dont link to anchors saying nothing that we dont already know when Thomas Bjorn makes his announcement tomorrow afternoon, because it’s a waste of air time. This is what I think about the picks. Tiger has built a strong friendship with Bryson De Chambeau who turned to him for advice after a few losses, notably his implosion at the European Open. Bryson’s very impressive back to back Fedex Cup wins over the past two weeks made him an almost certainty for the pick,  but it is the meeting of minds of him and Woods contributing to the American team that seems to have been the thing that made him a certainty. You wouldn’t call Woods a team player, and pairing him in four balls or foursomes would have been tricky, but he has been fullsome in his admiration of Bryson De Chambeau’s personality.

Tiger calls Bryson “Quirky, intelligent and very fiery”. “We are going overseas into a pretty hostile environment. We want guys who are fiery and tough”. Their curious, what I would call not obvious, friendship has evolved since January this year when Bryson approached Tiger and asked to play a practice round with him, something they now seem to do nearly every time they play in the same tournament. Bryson said “I think that if we pair up in the Ryder Cup maybe we can intimidate a few people”. Tiger, who has played with 12 different partners in his Ryder Cup career says of their friendship “it’s one of the weird ones. It just kind of evolved”.

I think Tiger is over estimating the hostile environment. That’s certainly what the European team encounter when they play the Ryder Cup overseas, but not over here. Our fans are too knowledgeable and respectful, we dont indulge in abuse.

Now Tiger has made the team he is going to be cautious about what he calls “playing around my spine”. He’s in the middle of playing five events in six weeks and will sit out this week’s pro am at the Fedex Cup event at Aronmink Golf Club. Players have the option to do this on the PGA Tour twice a year if they do other sponsor related activity.

The final US player will be chosen on the 10th of September after the Wyndhams Championship. At the moment many are pointing to Tony Finau, because he is the highrst ranked olayer on the FedEx Cup standings not yet in the team. But if I had a pick I would go for Keven Kisner, the heart of a lion and a gutsy competitor, over current form.