Justin Rose: No 1 in the world for a reason 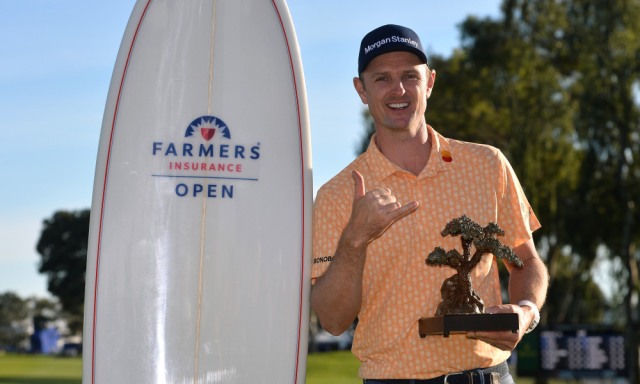 Justin Rose yesterday consolidated his World No 1 position with a 2 stroke victory at the Farmers Insurance Open. It capped off a sustained run of exceptional golf. He’s had a win in Turkey, tied second in The Open, the BMW Championship and Dell Technologies and T4 in the Tour Championship which led to him winning the FedEx Cup title.

At Torrey Pines South Course Justin began the final round with a three shot lead but soon lost that in a shaky start. With bogeys on 3 of the first 5 holes he pulled himself together telling himself:

”You’re No 1 in the world for a reason so start playing like it please”.

His nearesr rivals Adam Scott and Jon Rahm weren’t gaining any ground on him so he began to grind his round out. And then he birdied 5 of the last 12 holes to hold off Scott for his 10th PGA Tour victory. And with brand new Homma clubs and a different caddie, Gareth Lord, on the bag. He said he “always felt in control, I stayed patient and never started panicking”.

Rose’s career turnaround seems to have begun when he lost the playoff to Sergio Garcia in the 2017 Masters. At this time he was 136th in strokes gained in putting. Last year he was 21st. He has worked this out and is now a complete player. He has since won 6 times in 31 starts with 3 runner ups and 3 3rd places.

Justin now heads to this week’s Saudi International on the European Tour before taking 3 weeks off. He’ll be taking with him the surfboard given to the winner of the Farmers Insurance Open. He says he doesn’t surf and doesn’t plan to start, even though he lives in Bermuda.