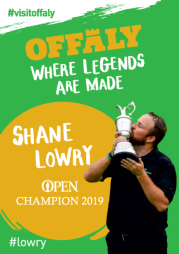 On Sunday after he had finished his media commitments, Open Champion Shane Lowry headed south to Dublin to celebrate with his family and friends. Later on, this week, he left his family home in Clara, County Offaly, headed by a marching band, to the local Celtic Football club where 10,000 fans waited to cheer him on. They have re named the Open Championship trophy, the Clara Jug.