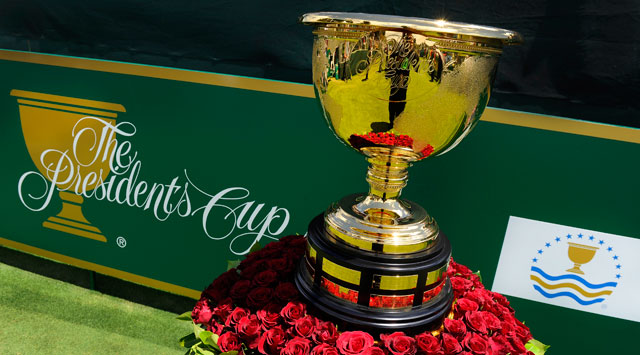 So for the ninth time in eleven outings the President’s Cup has been won by the American team. But that statistic belies that something special happened at the Jack Nicklaus Club in Incheon, South Korea. It must have been compelling to watch the final day live. It was golf at its very best – the 15.5 – 14.5 result that could so easily have been a tied match 15-15 but for Anriban Lahiri’s missed 4 foot putt on the 18th green following Chris Kirk’s unlikely holing of a 15 foot putt.

It was an extraordinary thing to see American players actually shaking with the intensity of the situation. J B Holmes playing Hideki Matsuyama had a pitch into the 18th green which he gripped and ungripped the club his hands were visibly trembling. A slow player at the best of times Holmes seemed unerved by the closeness of the competition. Perhaps with the Ryder Cup scenario in the back of his mind, Americans usually win the President’s Cup, how could they have put themselves into being threatened by the Internationals?

With a sigh of relief US Captain’s son Bill Haas managed to get Sun Moon Bae to concede the final hole and the match was won by the narrowest of margins. International Captain Nick Price alluded to the Ryder Cup: “I think it was 1983 when Europe lost by a point, Seve [Ballesteros] was in the locker room, and all the European players were down in the dumps and they were very depressed that they had lost,” Price said. “He looked at them all and said, ‘No, no, don’t be depressed. This is like a victory for us. We only need one more point.’” He said we (Internationals) are at that point now.

Well, its taken them a long time to get there. In 1983 the close Ryder Cup match at Palm Beach Gardens came in only the third match of a united European team. It’s now eleven matches in and the Internationals are still massive underdogs.  Presidents Cup matches were set up originally with 34 matches to Ryder Cup’s 28, far too much.

It’s been cynically called an event mired in an identity crisis not helped by a lack of interest in the event by both teams. Nick Price has said how difficult it has been to get the team to bond with them speaking six languages from seven different countries under a manufactured flag and no Tour Commissioner of their own. But Adam Scott said that this year there was much more investment from the Internationals. Branden Grace was a star performer. On the American side Mickelson played a particularly good singles against Charl Swartzel and grabbed the headlines for himself, yet again, by a ditzy rules infraction, dissing the opponents, ordering weird selfies and generally being the gung ho talisman inviting the US players to rub his rotund belly for luck. All elevating the event into the realms of bizarre entertainment rather than yet another sluggish golf team event.

Mickelson looks to be eyeing his future role in team golf competitons with relish. Of course he is looking to captain future sides in both this and the Ryder Cup. But what sort of captain he will make… He could be as good as Nick Faldo at the Valhalla Ryder Cup. There was a photograph of him with George W Bush taken last week that showed a little glint in his eye. It’s just my intution but it’s the first word of this Cup that I suspect he’s really interested in. What a politician he will make. It’s going to be so entertaining!