Posted on April 1, 2018 by queenieqantas 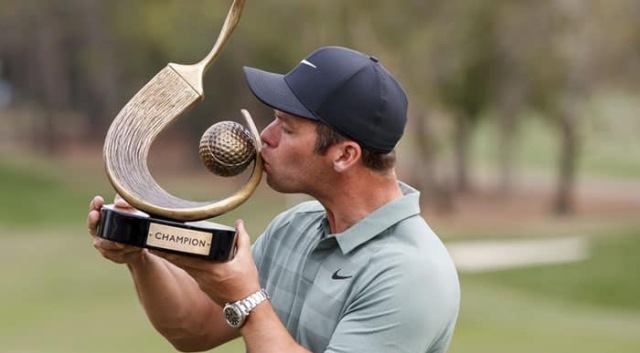 It was long overdue, Paul Casey’s second win on the PGA Tour and his first anywhere  since 2014. But he is a transformed player and person. I remember marshalling at a qualifying tournament at Sunningdale one year and oops, it just popped out as he completed his followthrough. He was on his way walking  down the fairway and watching the tremendous blow he made at the ball with his drive I might have just said “Wow. That was an angry one”. He heard this and stopped in his tracks. I ducked a bit, preparing for a verbal tongue lashing. But it didn’t come. Instead he seemed to stop and think. It was just an observation about that particular shot but since then he seems to have let a lot go mentally and seems very happy with his life as it is now. His superior golf is following in the slipstream of his peace of mind.

We can only hope that Tiger Woods will follow suit and re-find his mental calm after years of turmoil and his golf will consistently go along with it. Because this week it was all about Woods, Casey was like the side show. What is happening is very exciting and there is an anticipation now around Tiger. Television veiwing figures were up a huge 180%.

This week Woods got within a whisker of getting into a play off. On 79 PGA Tour wins, dare we hope he can overtake Sam Snead’s 82 titles? This week after holing a long birdie putt on the 71st hole to get within a stroke of the lead he just left his putt on the 72nd too short to get into a playoff.

Second. Who would have thought it a few months ago? Tiger swung his driver at nearly 130 mph, the fastest on Tour. In six starts since the return at the Hero Challenge his results are  T23, T9. 12th, MC, T5 and T2nd. Jack Nicklaus says “I’m amazed at how well Tiger is swinging and playing. It’s just fantastic”.

And Tiger responded “I’m excited. I do remember how to do this”.