PGA Tour to go to Japan 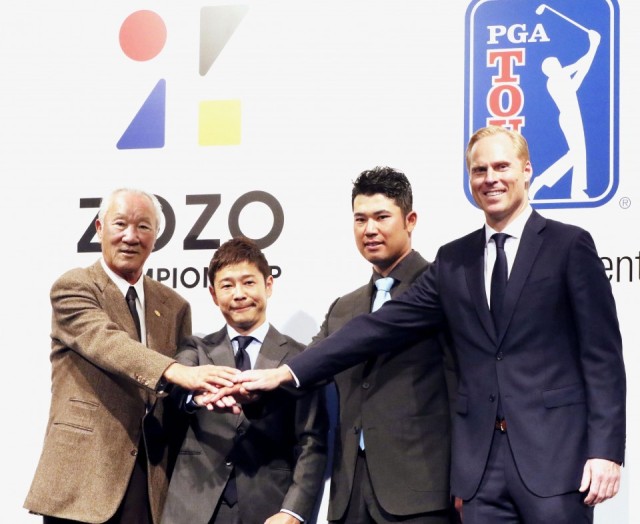 Japan will host its first PGA Tour event this October 24-27. The Zozo Championship will be a FedEx Cup event as part of the 2019-2020 season with a purse of $9.75 million, on the Narashino Country Club in Chiba. The field is 78 players comprosing 60 PGA tour professionals, 7 Japan Professional Golf Tour Organisation players, the top 3 from the Bridgestone Invitational and 8 sponsor’s invitation players.

The tournament is sponsored by Zozo Town fashion website, whose billionaire founder Yusaku Maszawa is famous as the first man to sign up to go to the moon on Elon Musk’s SpaceX Craft. He calls the tournament “a moon shot for Japanese golf. He is extremely honoured to have been approached by the PGA Tour”.

”Finally this day has come, I wish it had come earlier. If I were you get I would want to compete. It is a dream of Japanese golfers to compete in a PGA Tour event”.

Top Japanese golfer Hideki Matsuyama (pictured second right) , who has 5 PGA Tour wins says “there are a lot of differences between PGA tour golf and JGTO golf and the fans will get to see this with their own eyes not through TV. I want to play in front of my Japanese fans and show my appreciation to them”.